Home / World / Death by volcano rises to 62: 'Everything destroyed' 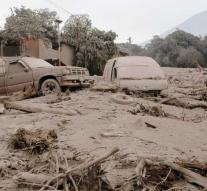 guatemala city - The Volcán de Fuego, which erupted violently on Sunday and demanded dozens of lives, emitted more volcanic material and gas clouds after a new explosion. The emergency response service adjusted the death toll on Monday from 38 to at least 62. There are also about 300 wounded, several of them with fire injuries.

Due to the new eruption, according to the authorities, more people near the volcano, one of the most active in Central America, have to be evacuated. On Sunday, more than 3,000 people fled the natural disaster. More than 1.7 million inhabitants can, according to the local media, suffer to a greater or lesser degree the consequences of the eruption, which has been labeled as the heaviest in more than forty years.

'The landscape on the volcano has changed completely, everything is destroyed,' said a volcanologist on the radio. Even in Guatemala City, 50 kilometers to the northeast, ash came down. The American seismological institute USGS registered an earthquake with a magnitude of 5.2 on the coast of Guatemala at a depth of 10 kilometers on Monday. There are no reports of damage or victims.

In the provinces of Escuintla, on the Pacific Ocean at the height of the observed earthquake, Sacatepéquez and Chimaltenango, a state of emergency has been declared by decree. President Jimmy Morales said that the governments of El Salvador, Honduras and Mexico immediately offered emergency aid.