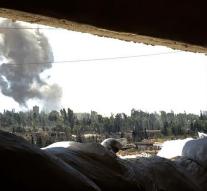 aleppo - At least four people were killed Wednesday by a possible gas attack on a neighborhood in the Syrian city of Aleppo. Also faced a lot of people, according to local sources with respiratory problems.

The al-Quds hospital said that at least four people deceased after inhaling gas. Also, 55 people were injured. The manager of the hospital to keep said pieces of clothing of patients and parts of vatbommen as evidence, that can be later analyzed.

According to volunteers who carry out rescue work used in the city, possibly chlorine gas. That would have been it came down in rebel territory in a barrel.


Aleppo has been the scene of heavy fighting between insurgents and government forces. In the part of town that is still held by the rebels, life is estimated to have about 250 000 people.