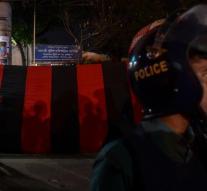 Units of the anti-terrorist police stormed the house in the Jhenidah district after a tip came in. The property would hid fans of a branch of the radical Islamic group Jamaat-ul-Mujahideen Bangladesh. They opened the fire on the police and dropped explosives.

Bangladesh has been struggling for several years with an increase in Islamic violence. Dozens of critics of radical Muslims have been killed in a very bloody way. In an attack at a dining cafe in Dhaka's capital, eighteen foreign visitors were killed last year.