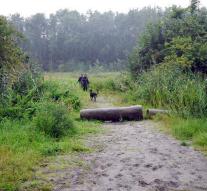 almere - The body that police took out of the water on Tuesday night in a park in Almere is indeed a seventeen-year-old boy who was missing. After investigation, police found Wednesday that there was a 'tragic accident.' Investigators found no clues that indicate a crime.

The boy had been with friends at the Oostrand Park on Saturday night. At midnight he left. Nobody saw him afterwards afterwards.

On Monday he was reported as missing, after which the police began an extensive search in and around the park. Presumably, the boy fell into the water in the dark and drowned, police informed.