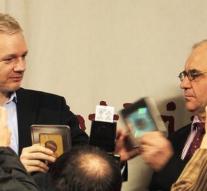 - WikiLeaks founder Julian Assange will probably soon be questioned at the Ecuadorian embassy in London. On that Ecuador and Sweden have signed a deal, after having negotiated a half.

The 44-year-old Assange is 3.5 years in the embassy. When the activist leaves the building, he risks being arrested for a rape case and extradited to Sweden. Assange fears then to be transferred to the United States, who want to prosecute him for leaking state secrets.