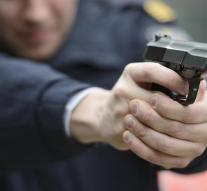 oklahoma city - A deaf man who could not hear an agent's order and thus ignored was shot dead. Neighbors of the man in Oklahoma City Oklahoma were late to offer.

The 35-year-old victim had a 60 centimeter metal pipe in his hand, with which he sat on the porch of his house. The man ignored an agent's order to lay down the tube. A policeman's handed colleague shot the man down.

It is not clear whether police officers saw the tube in the course of a gun. They were around for an investigation.