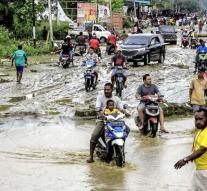 jakarta - The death toll from the sudden floods caused by heavy rainfall on the Indonesian island of Papua New Guinea has risen to 58. In addition, dozens of people are missing on Sunday. Also…

The national disaster service warns that the death toll can still rise because it is feared that there are still people under the rubble or remains of landslides. In addition, rescue workers have not yet reached all affected areas.

The center of gravity of the floods is in the city of Sentani, near the provincial capital Jayapura. So far, 4000 residents have been evacuated.