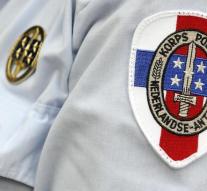 The two were in a Honda SUV with a total of eight Latino's, which eventually hit the highway at St Joris. That is located on the eastern part of the Caribbean island. The six other occupants were seriously injured, one of whom is still in critical condition.

In the heavily crashed car, the police encountered 23 weapons plus an unclear amount of drugs. The police responded to a call from the Coast Guard Caribbean Area that a small, fast boat was signaled near the coast. Probably the illegal immigrants went ashore and were subsequently picked up.

The police on Curacao do not have any definite assurance about the nationalities of all car occupants. Presumably, it's about Venezuelans. It is common for Venezuelans, due to the ongoing crisis in their own country, to illegally try to reach the ABC islands. Some illegal immigrants end up in crime or illegal prostitution.