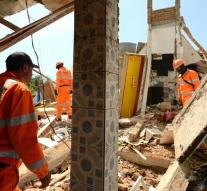 jakarta - The death toll due to the earthquake on Lombok has increased further. A spokesperson for the BNPB emergency response service spoke about 105 deceased victims.

The 6.9 earthquake has caused enormous havoc on the Indonesian island. Officials say that about 75 percent of the northern part of the island is without power. The authorities are still looking for survivors and bodies in the rubble of collapsed buildings.

Aid organization Oxfam reports that 20,000 people are housed in reception centers. Thousands of other displaced residents are forced to sleep under the open sky. Oxfam warns that clean drinking water is scarce because of the dry weather of recent times. Affected residents would also need clothing, medical supplies and food in addition to water.