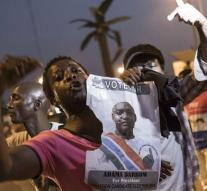 dakar - The threat of the West African grouping Ecowas to take the capital of Gambia as 'president' Yahya Jammeh has not quit, will not be executed immediately. informed the Government of Senegal to know that there is a mission negotiators to Jammeh and goes as long as it is not returned, the forces of ECOWAS undertake nothing against Jammeh.

The mission consists of, among others, the President of Guinea, Alpha Condé and that of Mauritania, Mohamed Ould Abdelaziz.

Jammeh which is in power in the tiny Gambia since 1994, lost the presidential elections in early December. He seemed to recognize quickly, but then changed his mind. Now he stubbornly refuses the presidential palace, leaving the State House.

The winner of the presidential election Adama Barrow, is the capital of Senegal, Dakar, fled. He has since sworn in as new head of state of the Gambia. The countries of the region, including Senegal and Nigeria have set the objective to overthrow Jammeh.