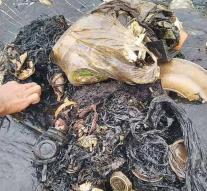 jakarta - On a beach in Indonesia, a dead whale has been washed up with more than a thousand plastic objects in the stomach. The beast would certainly have swallowed 115 cups, 25 bags, four bottles and two flip-flops.

Because the sperm whale already was in a state of decomposition when it washed ashore in the Wakatobi National Park, it was not possible to determine with certainty whether the plastic was also the cause of death. The total amount of plastic in the animal weighed about six kilos.