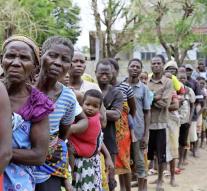 beira - The death toll after a powerful cyclone in Mozambique has risen to 446. That said minister of land and environment, Celso Correia. According to Mozambique, more than 530,000 people were affected by the disaster.

The Red Cross tries to help the victims. 'Thousands of people have been rescued with boats and helicopters from the flooded area and taken to evacuation centers where Red Cross relief workers receive them and provide first aid,' said spokeswoman Iris van Deinse.