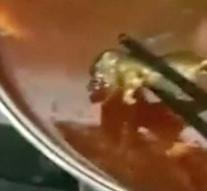 weifang - After a dead rat was found in the soup of a pregnant woman earlier this month, restaurant chain Xiabu Xiabu dropped no less than 163 million euros in market value. That reports the Chinese site Sina.

The pregnant woman had already eaten the soup before she discovered the rat. According to Kankan News, Mr. Ma, the husband of the wife, that the restaurant owners not only offered an amount to compensate, but also proposed to have an abortion and to reimburse those costs (about 2500 euros).

The branch managers had offered the woman an amount of converted 650 euros to compensate for the lugubrious find. The branch where the incident took place is temporarily closed.