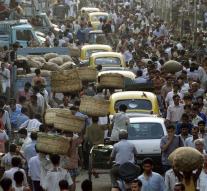 roorkee - An Indian man who wanted to put his own death, has previously said to a beggar were killed. As he hoped, according to the Times of India to start a new life with his mistress. The man eventually fell by the wayside through his phone usage.

The married man from Roorkee (Uttarakhand), according to the police ' had a perfect plan. ' He mutilated a beggar so that the body could not be identified. Then he put his own identity in the pocket of the victim.

Police officers scented danger when they discovered that the man has long had a relationship with a 22-year-old woman. They decided to listen to her phone. When it appeared that the duo still had ongoing contact.

The alleged murderer could be arrested when he Appts with his mistress. ' He thought he could roam freely because he was officially dead. But dead men do not use phones '', said a security source told the newspaper.