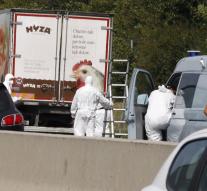 - The authorities in Austria have identified almost all bodies of 71 refugees who were found dead in August in a refrigerated truck. A spokesman for the police in the Austrian region of Burgenland said Wednesday that 56 death certificates were drawn up.

The refugees came from Afghanistan, Syria, Iraq and Iran. The bodies were discovered in a refrigerated truck that was broken down along the side of the road. The refugees are likely suffocated in the hold.

Hungary leads the criminal investigation into the incident, because the refugees were probably dead before the car had crossed the border with Austria. A group of alleged smugglers is in Hungary in custody.