Home / World / 'Dead' man in mortuary appears to be alive 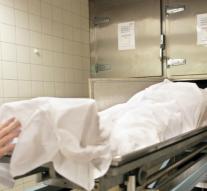 durban - A motorcyclist was pronounced dead after an accident and was placed in a refrigerator in a morgue, turned out not as dead as believed.

The local health authorities in the province of KwaZulu-Natal have launched an investigation into the bizarre incident, local media report.

The young man was after the accident Monday night spot declared dead by the paramedics. His body was taken to the morgue and placed in a refrigerator.

When the man was removed the following morning from the refrigerator so he could be identified by the family, the staff to a shocking conclusion came. The man was found to have a pulse and was breathing. He was immediately taken to the nearby hospital where he could be resuscitated.

Shocked family is taken care of by social workers.