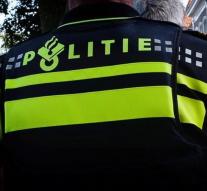 rotterdam - The police found a dead man in a house in Rotterdam-South on Tuesday. Two men have been arrested and are still being heard.

Agents went to the house on Wolphaertsbocht after a report about a fighting party. The police assume a crime. There is nothing disclosed about the identity of the victim and the suspects.