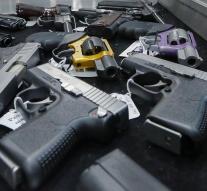 - In a shooting at a house party in Los Angeles Saturday three deaths. At least a dozen people were injured. Police have arrested one person, two others are still being sought. The first prisoner would be a woman.

The shooting took place after it broke out at the party quarrel. The trio went off during the quarrel and went back armed. Then the three began to shoot him.

Some wounded are in critical condition.