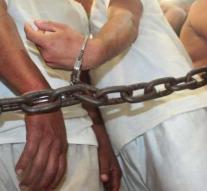 guatemala city - In the event of an uprising in a prison in the Guatemalan city of Fraijanes, at least seven detainees were shot dead on Sunday. There were also four injuries according to the local authorities.

A spokesperson for the extra-secure Pavoncito prison said that after a fight between inmates, riots broke out in a closed part of the prison. No guards were hurt and the order in prison was restored.

In 2013, twelve detainees were killed in an uprising in the same prison.