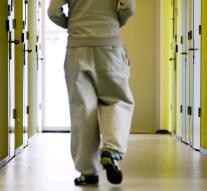 - At least six people were killed Sunday in a prison uprising in Guatemala. Some of those detained have been armed with automatic weapons. The army and special police units were deployed to retake the prison, said a spokesman for the prison system.

The complex is some 65 km from capital Guatemala City was overcrowded. In prison was place for six hundred prisoners, but there are more than three thousand people were trapped. The Guatemalan authorities had last year commissioned to expand the complex from.