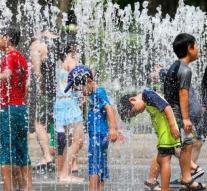 tokio - The Japanese police raided a hospital where five patients died during a heat wave. That happened after the air conditioners in their rooms had given up the ghost, the newspaper Asahi Shimbun reports.

The five eighties died at the end of August in a period of three days. The mercury in Gifu prefecture then tapped 35 degrees. In that period the police received a phone call from a tipster who was attached to the hospital. The caller warned that several patients had died, presumably due to the high temperatures in the building.

The director of the hospital says that the air conditioning on two floors was broken during the heat wave. Repairers thought they needed about a month to fix the problems. Employees then decided to place fans in rooms of patients.

The police are investigating whether the institution was guilty of negligence by leaving people in sweltering rooms. The director of the institution states that some patients have a preference for such warm spaces.