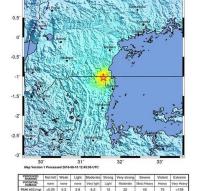 - "When an earthquake in Tanzania at least ten people died and over a hundred injured. Which has informed the Tanzanian police. The quake with a magnitude of 5.7 struck especially the northwestern Kagera region, on Lake Victoria. Also from the border regions are reports of damage."

"The epicenter of the quake was at about ten kilometers deep in northwestern Tanzania, near the border with Rwanda and Uganda."