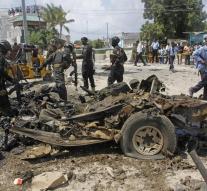 - A bomb attack in Mogadishu on Sunday killed at least six people died. Twelve others were injured. Target of the attack was the headquarters of the criminal police department CID in the Somali capital. The attack was claimed by terrorist group al-Shabab.

A spokesman for al-Shabab attack began with a suicide attack on the port. The perpetrator rammed with a car loaded with explosives. After the first explosion was, according to eyewitnesses, shot about a half hour. All four offenders were slain, police said.

It was the second attack by al-Shabab in Mogadishu in a week. Tuesday went two car bombs at the gate of AMISOM, the peacekeeping force of the African Union. Thirteen people died.