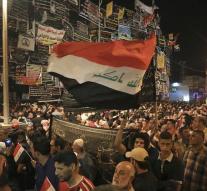 baghdad - In an attack with a car full of explosives in Rashidiya, just north of Baghdad on Tuesday at least nine dead and 32 wounded.

Responsibility for the attack has not been claimed, but the suspicion goes to Islamic State. After recent military defeats seize the jihadists more often the weapon of terrorist attacks.