Home / World / Dead despite the ceasefire of Eastern Ukraine 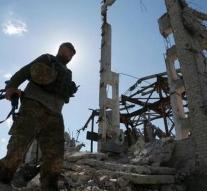 kiev - Despite a ceasefire that came into force on Thursday night, a soldier died in enemy Ukraine in the eastern part of Ukraine on Friday. That declared a Ukrainian army spokesman against the television channel 112.

According to the Ukrainian army, the pro-Russian separatists opened the fire at two o'clock after midnight local time when the ceasefire came in. The separatists also accuse the army of violating the file. In two attacks of the army a citizen would be severely injured. Overall, the situation would have become a bit calmer.

The ceasefire has been agreed between representatives of the Ukrainian government, Russia and the Organization for Security and Cooperation in Europe (OSCE). The ceasefire must enable a safe start of the school year on both sides of the line in the conflict area. Traditionally, children in Ukraine and other ex-Soviet countries return to school on September 1st.

Since the outbreak of the armed conflict in eastern Ukraine in 2014, estimates from the United Nations have killed 10,000 people. Arrangements for peace come true on both sides. Around the end of Easter, Christmas and the beginning of the new school year, a ceasefire has been agreed, with hostilities increasing in a few days.