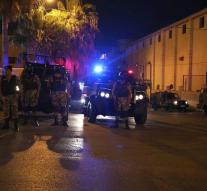 amman - A fatal accident occurred on Sunday in the territory of the Israeli embassy in Amman, Jordan's capital. This has revealed a Jordanian security officer without giving details. The police have seized the area around the heavily guarded complex.

According to local media, a young Jordanian would have stabbed a staff member of the Israeli embassy before he was shot dead. The Israeli was injured in life threatening.