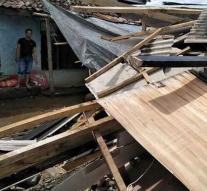 jakarta - At least five people were killed by a landslide on the Indonesian island of Java. Fourteen people were injured, the authorities report.

The landslide followed heavy rainfall and hit a village on the island. More than fifteen people are still missing. The assistance is difficult to get started.

'Our team is not on site yet. Many roads have been blocked by the landslide ', said an official of the national rescue service against Metro TV. He said that two excavators are trying to reach the disaster site.