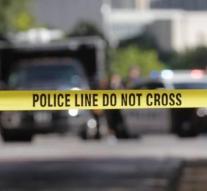 minneapolis - By a gas explosion at a high school in the American city of Minneapolis, an employee has died on Wednesday.

At least six people were injured, some of whom were in critical condition at the hospital. There would also be people missing. The explosion destroyed a large part of the building.

Construction workers were busy with the gas pipeline when the explosion occurred. Because of the holiday, only a few people entered.