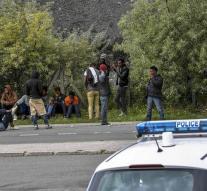 calais - A 22-year-old man from Sudan died in a fighter between migrants near the northern French city of Calais.

The incident happened Friday evening in a divisie in Divion southeast of Calais. It is still unclear which broke out the violence.

In July, in a Calais industrial area, there were also violent collisions between migrants. In addition, sixteen people were injured.

In Calais, the refugee camp, known as the 'jungle', was evacuated last October. Refugees are hoping to come to the United Kingdom via the Channel to the Northern French region.