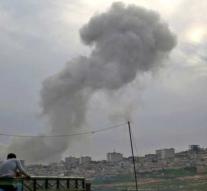 afrin - At least eleven people were killed when a bomb exploded in the Syrian town of Afrin. It concerns four fighters from the Free Syrian Army (FSA) and seven civilians, said a source in the security services Monday against the Turkish state press agency Anadolu.

According to the source, the explosive would have been left behind by Kurdish fighters, who are seen by Turkey as terrorists. The bomb allegedly exploded when the FSA fighters searched a building on Sunday night. The explosion also caused damage to buildings and cars in the area.

Turkish troops and their allies of the FSA moved into the center of Afrin on Sunday, the most important place in the area of ​​the same name. Turkey started an offensive earlier this year to expel the Kurdish militias from the region. Ankara sees those YPG militias as an extension of the terrorist PKK movement.