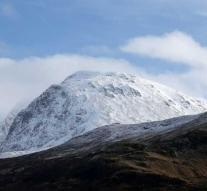 edinburgh - An avalanche on the highest mountain in the United Kingdom has cost the lives of at least three climbers. A fourth person was injured, reports the newspaper The Scotsman.

The accident happened on Ben Nevis, in the Scottish highlands. The authorities sent two helicopters and three ambulances to that mountain. Nothing has been announced yet about the identity of the victims.