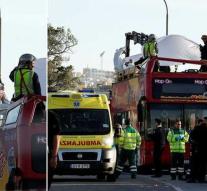 valletta - At least two tourists were killed in an accident with a tourist bus in Malta. Six other people were seriously injured, reports the Times of Malta newspaper. That happened reportedly when the double-decker bus in Żurrieq was driving under low-hanging branches of a tree.

According to newspaper sources, the victims were the newspaper on the open upper deck of the bus. They were hit by the branches. A 62-year-old Belgian man and a Spanish woman (37) died on the spot.

The six people with serious injuries come from, among others, Great Britain, Germany and Italy, the authorities report. The nationality of one of the victims is still unknown. In total, 50 people had to be treated for their injuries. Prime Minister Joseph Muscat has condemned the relatives of the deceased victims.