Home / World / Dead Brit in tent found only after year 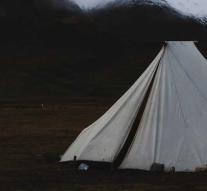 london - A man, after his death, presumably went unnoticed in a tent in Great Britain for a year. His identity is a mystery that the police now hopes to clarify, reports British media.

The authorities found the man's remains last year in the tent, which was near a road in Weston-super-Mare. The police suspect that it is a man from Birmingham, who was about 59 or 60 when he died. He has not been formally identified and is unable to track down the relatives. That is why the authorities are now going to the media.

The problems are caused, among other things, because the body was in a far-reaching state of decomposition. As a result, according to the police, it was 'extremely difficult' to identify the man. Several documents also appeared in the tent, including a newspaper that was already one year old at the time.

'We would have preferred that his relatives had not come to his death in this way', a police spokesman acknowledged. 'But given the amount of time that has passed, it is important that they know it. '