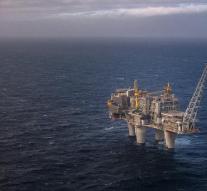 oslo - A huge wave in the North Sea on Wednesday killed a person on a drilling rig for the Norwegian coastal life. Two others were injured. Their nationality was not disclosed. This was reported by the Norwegian state oil company Statoil, operator of the Troll gas field.


The damaged floating rig from China Oilfield Services was partially vacated it. Nearly 50 of the 106 were evacuated workers on the platform. The platform could reach the mainland on their own. Norway had all day Wednesday already experiencing stormy weather.
,, The sea was ferocious in the accident. The waves were 14 meters high and in addition there were winds of 25 to 30 meters per second. The wind prevented a helicopter on the rig could land. People had to be hoisted, '' says Norwegian authorities told Reuters.
Production at Troll, the largest gas field in Norway, could continue.
NEW