Home / World / Dead and wounded in explosion in Mexico 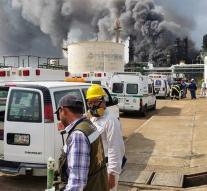 - At least three people have been killed by an explosion at an oil refinery in the Mexican state of Veracruz. At least 136 people were injured, reported state oil company Pemex. Dozens of victims have been discharged from hospital.

Television footage shows that after the explosion dark clouds of smoke rose up from the grounds of Pemex in the city of Coatzacoalcos. Hundreds of people were evacuated by local authorities as a precaution.

The oil company warned residents to stay away initially because toxic fumes were released. Meanwhile, the situation would be under control.,, There is no risk to the population, '' Pemex announced via Twitter.

About the cause of the explosion is still not known, but according to the company, there is no impact on the export of oil. shipped a lot of oil via the nearby port of Coatzacoalcos.

It is not the first time that the oil company has been hit by such a disaster. As dozens of people were still in 2013 died in a gas explosion at the headquarters of Pemex in Mexico City.