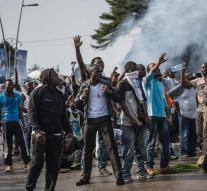 - In an attack on the headquarters of the party of opposition leader Jean Ping of Gabon in Libreville in the night between Wednesday and Thursday two dead and sixteen wounded.

That's Ping according to Radio France Inter let you know. A government spokesman said the attack was directed against 'criminals' who had previously crossed the parliament building on fire.

In the West African state of Gabon's violence erupted after incumbent President Ali Bongo Ondimba narrowly the winner of the election was declared. According to the opposition has been tampered with the results.


France has called to exercise utmost restraint parties in Gabon.,, Within the framework of a political process, there is no room for violence, 'said the French foreign minister, Jean-Marc Ayrault.