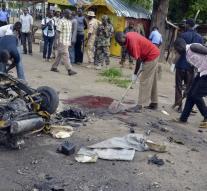 abuja - By a suicide bombing in the Nigerian state of Borno on Sunday nine people died, 24 others were wounded, said the Nigerian army.

The attack was carried out by three children aged ten to fifteen years. In the incident took place in the city Benisheik in the northeast of the country. The attack came a day after the army had slain more than twenty insurgents in Borno.

Borno is the Islamic terror group Boko Haram emerged. The terror group has since 2009 tens of thousands of people were killed. Nigerian President Muhammadu Buhari has his army commissioned before the end of this year to end the rebellion by Boko Haram.