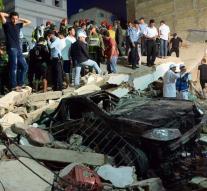 casablanca - In the Moroccan city of Casablanca Friday three people were killed when a building collapsed, as Moroccan media report Sunday. At least 24 people were injured. May be several more people under the rubble. The authorities have arrested the owner of the property.

At the time the building collapsed, many people were present at the café on the ground floor. It is not known why the four-storey building has collapsed. According to local media had the building initially but one floor and the owner received a permit to build on. The work would be completed about six months ago. Casablanca are many buildings in poor condition.

King Mohammed VI has expressed its sympathy to the families of the victims and will take on the funeral and hospital costs.