Home / World / Dead and wounded by bomb in Turkey 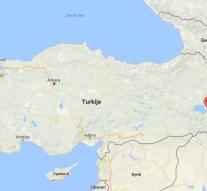 ankara - At least three people were killed Wednesday when a car bomb exploded near a police station in eastern Turkey. according to the Turkish state television TRT also became at least forty people injured.

It is still unclear whether all the victims were employees of the police. Turkish Prime Minister Binali Yildirim confirmed on television that a police station was attacked in Van province, but gave no details. The responsibility for the explosion has not yet been claimed.