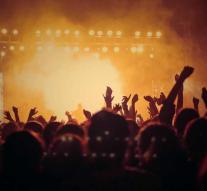 sydney - A 19-year-old visitor to a music festival in the Australian city of Sydney has passed away. Two women and a man were transferred to the hospital in a critical condition. All four victims have most likely taken an overdose of drugs.

The Knockout Games of Destiny is the largest indoor festival in the world. Thirteen visitors had to go to the hospital for treatment and 130 others needed medical attention on the spot.

That evening, five people were arrested with a large amount of drugs in their pockets. One of the detainees, an 18-year-old woman, had 400 pills with her.