Home / World / Dead and seriously injured in explosion in Chimay 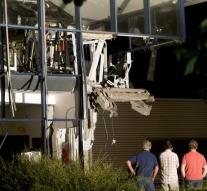 - In the Belgian Chimay is the night of Thursday to Friday a fatality in an explosion in a sports center. Also, four people were injured. Two of them have been put to hospitals with serious burns in the surrounding area. A spokesman for the emergency services, the cause is probably a gas leak.

The explosion occurred in a warehouse of the sports complex. Part of the building was destroyed.

During the explosion, shortly after midnight, there were five people in sports Le Chalon.