Home / World / Dead and missing after the tragedy on Everest 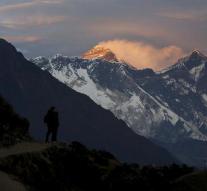 kathmandu - In a dramatic weekend for climbers on Mount Everest is the death toll now missing two Sunday again, two climbers from India for more than 30 hours. After the death of the Dutchman Eric Arnold (35) made from the same group of mountaineers also the 34-year-old Australian Maria Strydom living on the slopes of the highest mountain in the world.

Strydom Arnold died just as to the consequences of altitude sickness when she was on the descent after reaching the top. Trying to salvage the body of the woman, a teacher at the Monash University in Melbourne.

Two Indian mountaineers stayed more than a day in the 'death zone', the area between the peak at 8850 meters altitude and Four camp at an altitude of eight kilometers. On that route passing the most climbers.,, We have more than 30 hours had no contact with them and it is not clear whether they have reached the top, '' Wangchu Sherpa said the company Camp Trekking Nepal. Two other Indians have returned, albeit with frostbite. That happened this weekend dozens of climbers.