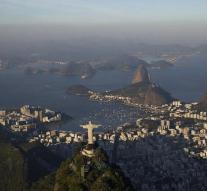 rio de janeiro - A boat of about seventy people aboard shipwrecked on the Xingu River in northern Brazil. Authorities from the state of Para reported Wednesday that twenty suspects have been able to save.

The other passengers are missing. According to the newspaper O Globo, the bodies of seven victims have now been taken.

The accident happened due to an unknown cause between the cities of Porto de Moz and Governador José Porfirio. The Xingu River is very wide there. The ship 'Comandante Ribeiro' was from Santarém. Vitória do Xingu was the final destination.