Home / World / Dead and injured in earthquakes in Italy 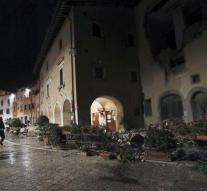 rome - Central Italy is Wednesday hit by three earthquakes, the second of which was the strongest. The first quake had a magnitude of 5.4. The second came two hours later with a magnitude of 6.0, was a little later a third quake with a magnitude of 4.9, according to the US Geological Survey USGS. The tremor occurred at about 70 kilometers from the city of Perugia, but both were felt in Rome, some 150 kilometers away.

Dozens of people were slightly injured in the earthquakes. Four victims are seriously injured but not life-threatening, reported the head of the Civil Protection Department in Italy. An Italian news agency reported that a death has occurred.

The quakes occurred 10 kilometers deep, relatively close to the surface for an earthquake. The epicenter was in all cases near the town of Castel Sant'Angelo, in the Marche region. In the village with about three hundred inhabitants is a power failure, said the mayor.

According to newspaper Corriere della Sera ran a lot of people in Rome to the streets when the earth began to shake. Pescara, stopped on the east coast, was a football game between the home team and Atalanta Bergamo.

There is also a lot of damage. In some places near the epicenter collapsed buildings. Camerino the tower came down. Some roads are blocked by large boulders.

The same area was also hit in August. Then came nearly three hundred people lost their lives. That quake had a magnitude of 6.2 and occurred at about 5 kilometers deep.