Home / World / Dead and injured in case of crash accident US 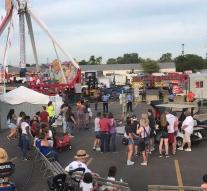 washington - In an Ohio-based accident in Columbus in Ohio, Wednesday, an eighteen-year-old man died.

At the 'Fire Ball' attraction at the Ohio State Fair, a whole row of chairs loosened and people were thrown out of the device. Seven people have been injured. Five of them are ill, have alerted firemen to local media.

The governor of the state of Ohio, John Kasich, has closed the fairground attractions on the annual market.