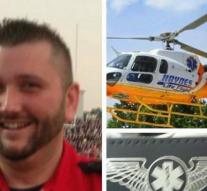 goodman - Four occupants of an ambulance were killed Saturday when the aircraft crashed near Goodman in the US state of Alabama. Among them was a patient who was brought to the hospital.

The man had his leg broken lost in a car accident and had thereby consciousness. The helicopter had to take him to a hospital in Montgomery, some 140 kilometers away.