Home / World / Dead after earthquake in Polish mine 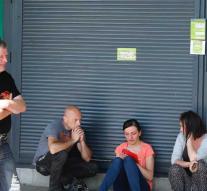 warsaw - The death toll in the Polish coal mine hit by an earthquake has risen to two. Rescue workers are still looking for three miners who are about one kilometer underground, said the director of the company that owns the mine.

The mine in the south of Poland was hit by an earthquake on Saturday with a force of 3.5 to 4.0. At that time, two miners could be rescued after the corridor in which they worked had partially collapsed. The duo is doing relatively well, according to the director of the company JSW. They could walk without assistance and have been transferred to a hospital.

The kompel were part of a team that built a new tunnel. A spokesman for the emergency services said earlier against television channel TVN24 that the work is complicated by a high concentration of the poisonous gas methane in the mines. In total, about 250 people were working in the mine at the time of the earthquake.