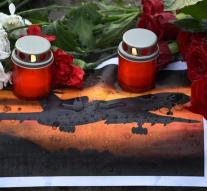 moscow - Russia mourns Monday to the 92 victims of the air crash over the Black Sea. More than 3,500 people have been deployed to search for human remains and debris of the military plane that crashed shortly after take off from the airport of Sochi.

On board the Tupolev-154 were dozens of members of the Alexandrov Ensemble, a famous choir of the Russian army in the run up to New Year would occur for Russian troops in Syria.

A well-known doctor, Elizaveta Glinka, who belongs to the Human Rights Advisory Council President Vladimir Putin, was in the unit.

According to Transport Minister Maksim Sokolov is the plane crash probably caused by a technical failure or pilot error. 'The idea of ​​a terrorist attack is not one of the main theories,' he said.

Monday was recovered eleven bodies according to the Defense Department. In search his 39 ships, five helicopters, deployed a drone and over a hundred divers.