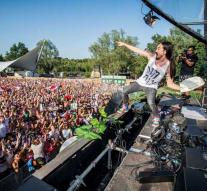 antwerp - The organizers of the Belgian dance festival Tomorrowland sent an e-mail on Saturday to 64,007 festival goers who bought a ticket in 2014 to inform them about a data breach. 'The file in question only contains the name, e-mail address, gender, age and postal code, so no payment details, passwords or addresses,' emphasizes spokeswoman Debby Wilmsen of the organization of the festival in Boom near Antwerp.

Tomorrowland, also popular with many Dutch people, was approached last week by his supplier Paylogic. He had found an unusual activity on an outdated subsystem. After an extensive analysis, an old scan file of Tomorrowland 2014 appeared on that server. It was immediately taken offline. Paylogic says it regrets the incident.