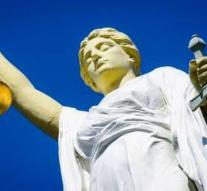 the bosch - The case law in East Brabant has been a data recall. The Public Prosecutor received excessive authorization for the computer systems, which enabled employees to read judgments from judges before they were pronounced. That is how NRC reports Saturday.

The computer game was playing in a major drug case. The court sent a letter to the suspects' lawyers. 'The OM has in no way attempted to influence the content of judgments,' emphasizes the court according to NRC. The Personal Data Authority has been informed.